Fit For Purpose – a practical and conceptual exploration of silver

Contemporary British Silversmiths is delighted to announce it has been invited by the Victoria and Albert Museum to create a display to complement its much anticipated major exhibition, British Design 1948-2012: Innovation in the Modern Age. Part of the V&A’s British Design Season, this display represents the state of the art in contemporary silverware. Fifty-two established and up-and-coming silversmiths from around the UK have created unique work on the theme of Fit for Purpose: a practical and conceptual exploration of silver. The exhibition is  housed within the Museum’s Silver Galleries and is supported by the Goldsmiths’ Company. 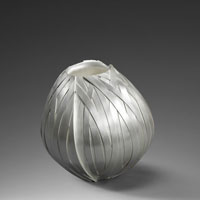 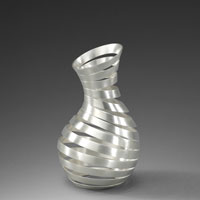 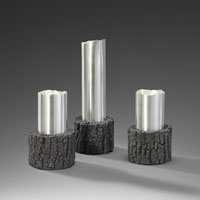 In addition, all work bears the new Diamond Jubilee commemorative hallmark which will be struck only during 2012, alongside the 2012 UK hallmark, making these objects historically significant and collectable. The exhibition takes an imaginative look at the idea of ‘Fit for Purpose’. Each objects’ function is explored through the medium of silver, both practical and conceptual, with each piece described by its purpose. The display includes work by some of the best practising British silversmiths today.

Clive Burr, Chairman of Contemporary British Silversmiths said: “We are absolutely delighted to have been invited to exhibit at the V&A, particularly in such a significant year. As the leading independent association for contemporary silversmithing, we have been active both nationally and internationally for two decades promoting innovative thinking and excellence in British silver design and workmanship. We are thrilled to have been recognised for this and to have the opportunity to showcase our work in such a prestigious venue.”

Eric Turner, Curator at the V&A commented: “Contemporary British Silversmiths aims to promote the highest standards of silverware design in Britain today. This collection offers supreme evidence of how its members succeed in acknowledging the rich historical heritage that is British silversmithing while equally renewing and reinventing it.”

Exhibiting alongside established members of the association, many of whom are represented in national collections, 13 new graduates will be displaying their work in this showcase of contemporary design. Contemporary British Silversmiths has long supported the next generation of silversmiths through its mentoring scheme. Upon joining, new graduate members are offered a mentor as their first point of contact and are actively encouraged to seek new skills by consulting with other members on either a one-to-one workshop basis or via telephone or email contact.