Martin Keane was our Design in Silver Award 2009 recipient and proved himself more than worthy of the judge’s choice. He is moving from strength to strength showing a dedication that is sometimes breathtaking in its speed. He has had a busy year at Bishopsland where he is about to complete his study. He opted to use his award to make a piece of work and in spite of two very hectic schedules Martin and Howard Fenn managed to find time to be student and instructor for a work experience placement that Martin says has dramatically enhanced his skills.

Firstly, I would like to express how honoured and grateful I was to receive the ‘Design in Silver Award, 2009’ from Contemporary British Silversmiths. As someone starting out in the industry it is always a great encouragement to be given such an important commendation and helping hand. Through the generosity of Charmian Adams in sponsoring the award I have really progressed in my skill and knowledge levels.

To give a bit of background about myself; I graduated with an Applied Arts BA from Middlesex University in 2009. Fortunately for me my senior tutor on the course was Julie Chamberlain who was instrumental in guiding and mentoring me to developing a love for working in metal and steering me towards starting a career as a silversmith. From there both Julie and Roger Taylor suggested I apply to go to Bishopsland which has been an incredibly positive and rewarding experience and has proved to be the perfect bridge between leaving university and setting up on my own.

My work up to now mainly revolved around the technique of raising, a skill I find satisfying and rewarding in its execution and possibilities of form. However, I am fascinated by the whole range of techniques the silversmith must master. Some of the most important of these are the skills to be learnt in soldering and fabrication and I decided to use the award to learn more in this field.

The project I very much wanted to realise was a wine decanter. It involved compound curves and other challenging aspects in its construction and I felt it would be the perfect vehicle for learning how to fabricate a complex piece. I had the great privilege of being under the tutelage of Howard Fenn at his workshop in Camberwell which he shares with Steve Wager.

Both Howard and Steve were very welcoming and good humoured and showed great generosity in their advice and help during my time with them. Howard was a fantastic teacher allowing me to try and work out things for myself and then stepping in when it inevitably all got too much for me and frustration levels reached dangerous limits. He showed me what I think is a silversmith’s greatest attribute: patience! In this way I was able to understand and learn step by step the intricacies of seeing my design to completion in spite of all its tricky complications.

In making the wine decanter I learned: 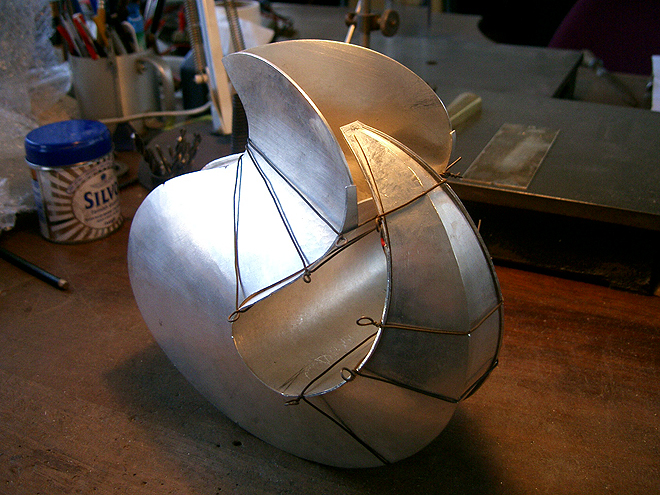 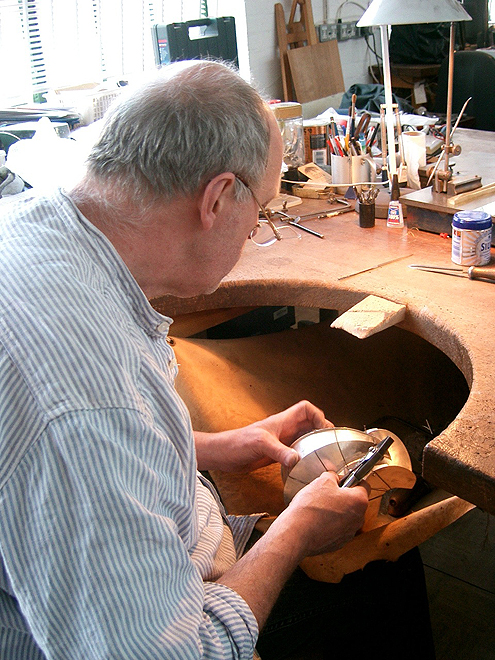 The amount of knowledge Howard passed on to me was invaluable and I am sure will save me years of mistakes and heartache in the future. He was absolutely thorough and meticulous in his approach leaving no stone unturned in the safeguard of getting a good result. Experience like this cannot be learnt from books. Instead from seeing a true craftsman I feel I can go forward from here and tackle projects like this on my own with confidence. The efficient methods and professionalism I saw with Howard is something that has, I hope, also rubbed off onto me.

Another aspect of spending time with Howard and Steve was the overall education they gave me on all aspects of the industry. Lunch times were always a highlight as I used to be a chef and enjoyed giving them something back and cooking for them, having a Japanese mother I made them a sushi lunch which proved an opportunity for me to turn the tables and educate them on the finer etiquette of Japanese dining!

The willingness to help on Howard’s part even went as far as allowing me to come several more times to the workshop than had originally been agreed so that I could make as good a job as possible on my piece. It seems indicative of how people in this industry are; only too happy to help each other and someone starting out. Contemporary British Silversmiths and all its members have been absolutely great in this respect. Richard Fox and his team gave me a part-time summer job between my second and third year at university despite my having little to no experience. It makes me feel I have chosen well a career in such a fascinating, rewarding profession.

Thank you very much.

At this year’s AGM Martin told us that the piece you’ve seen in this article was sold during British Silver Week. Last year, after seeing all the work at New Designers 2009 the judges felt that Martin was the obvious choice and he’s more than justified their decision. He’s going from strength to strength showing a passion for the subject and an obvious enthusiasm we all share. We wish him all the best in the future and look forward to seeing his new work.